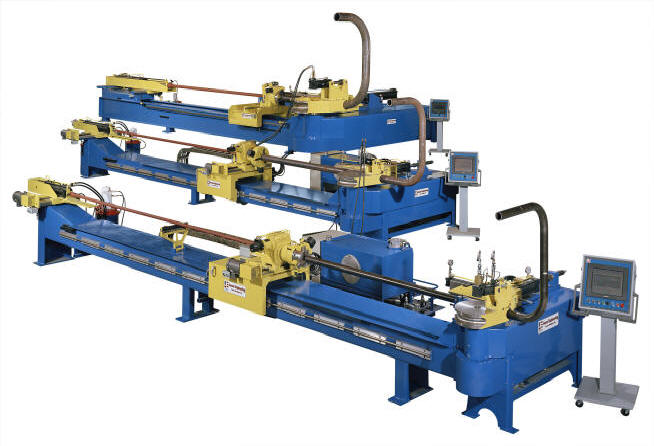 1000CNC series benders are CNC controlled 3-axis benders - hydraulically powered on all axes. With the proper bending tools, they have the power, accuracy, and rigidity to produce wrinkle free bends, with a minimum of ovality and wall thinning, in pipe and tubing of various metals and alloys.

Benders are more rugged, and versatile than traditional "swing arm" benders. Because no swing arm or pressure die mechanism hangs below the plane of the bend die, the main frame of a 1000CNC series bender is positioned where it ought to be, directly beneath and supporting the pressure die slide. Thus, all the bending forces - exerted by the spindle and resisted by the pressure die - are directly "resolved" within a single, compact heavy duty, tubular beam. Jesse Co. 1000CNC series benders also have the largest spindle and bearing diameters, the greatest spread between bearings, and the smallest distance from bend die to upper spindle bearing - all to insure the greatest possible rigidity.

By mounting the hydraulic clamping mechanism on the rotating bend die itself, Jesse Co. has eliminated the conventional swing-arm. There are many advantages to this system.

Machine and tooling maintenance are reduced. There are no swing arm slides or toggle linkages to sear or break, and less stress and wear on the tooling.

The pressure die mounts on a massive master-bar carrier riding on oversized ways which are attached directly to the main beam - not to a cantilevered arm.

The pressure die carrier slide and the masterbar are long enough to permit making 3xD 90º bends at the machine's rated capacity. (Greater lengths are available).

All set up pressure adjustments are made from the control console

Pressure die/carriage collision protection software prevents damaging collisions which can otherwise occur through operator error - i.e. due to closing the pressure die when the carriage has been advanced into the pressure die area.

Booster bending (optional) involves a continuous push-force applied directly to the workpiece through a booster clamp. To achieve maximum booster effect, the booster cylinder and its mounting system must be able to exert a sufficient load to bring the workpiece close to compressive yield. With the Jesse Co. boost system, the booster clamp is mounted directly on the rear of the pressure die, which then provides continuous column strength reinforcement of the workpiece under high booster loads. A sequence of up to ten pre-selected boost pressures are automatically applied as designated degree-of-bend points are reached. 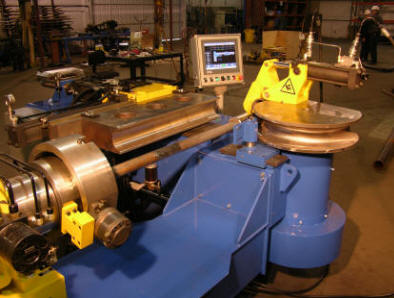 The "Overhead" clamp opens upwards; eliminating the interference with the forward feed of the bent workpiece; a common problem with traditional swing arm benders.

The carriage/mandrel beam incorporates the mandrel extractor cylinder and mandrel rod supports together with the ways for the carriage.

The basic bender is complemented by the carriage/mandrel beam unit, without design compromises to either. Because the main beam and drive cylinders are under the pressure die slide, rather than under the mandrel beam, as in most benders, the carriage is designed to accommodate the centerline height of the bender's tooling, not vice versa. When a carriage is added to a traditional swing arm bender, the centerline height of the bend die must be elevated to accommodate the carriage collet's height above the main beam. This extra tooling height compounds the risk of bend die tilt.

Jesse Co.'s 1000 series design eliminates that problem. The standard 20' (6.1m) carriage travel and load length is also not restricted by the bender's main beam length and does not require an extended frame or other modifications.

The carriage rides on precision ground, round ways for smooth travel (distance-between-bend movement) - driven by a powerful hydraulic motor through a rack and pinion. During the bending cycle, this drive is declutched to allow free towing of the carriage as the tube is drawn around the radius die. Carriage boost is also available.

Two collet/chuck options are available, a jaw type chuck for heavy walled or pre-flanged tube or a collet mechanism for thinner walled tube. the carriage and chuck/collet have sufficient power and grip to sustain all movements on both axes within the machine's capacity.

Mandrel rod/workpiece supports within the beam automatically retract as the carriage passes overhead. 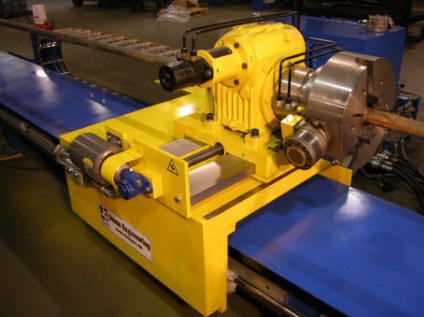 Fig. 3 Power centerline radius adjustment of the carriage and the mandrel unit during set-up is standard on 1000 CNC series benders.

Jesse Co. has been offering CNC Pipe Benders since the early 1980's. In 1999 Jesse partnered with Current Tech to implement BendPro, a sophisticated CNC control. 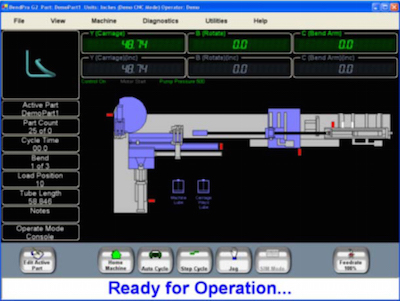 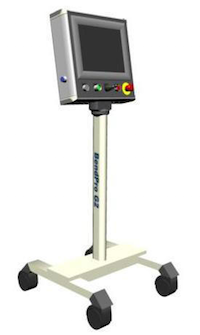 Specifications, capacities, and design features described are subject to change without notice.