Jesse Co. Single Axis benders are operator controlled (non-CNC) 1-axis benders - hydraulically powered. With the proper bending tools, they have the power, accuracy, and rigidity to produce wrinkle free bends, with a minimum of ovality and wall thinning, in pipe and tubing of various metals and alloys.

Benders are more rugged, and versatile than traditional "swing arm" benders. Because no swing arm or pressure die mechanism hangs below the plane of the bend die, the main frame of a 1000 series bender is positioned where it ought to be, directly beneath and supporting the pressure die slide (Fig. 4). Thus, all the bending forces - exerted by the spindle and resisted by the pressure die - are directly "resolved" within a single, compact heavy duty, tubular beam. Jesse Co. 1000 series benders also have the largest spindle and bearing diameters, the greatest spread between bearings, and the smallest distance from bend die to upper spindle bearing - all to insure the greatest possible rigidity.

The main components included in the standard Jesse Co. Single Axis bender are the Main Frame, the Mandrel Table, the Mandrel Extractor, the Mandrel Rod, the Hydraulic Control System and the Overhead Clamp.

By mounting the hydraulic clamping mechanism on the rotating bend die itself, Jesse Co. has eliminated the conventional swing-arm (Fig. 4). There are many advantages to this system.

Machine and tooling maintenance are reduced. There are no swing arm slides or toggle linkages to shear or break, and less stress and wear on the tooling. 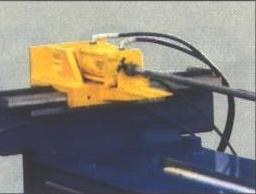 The basic bender is complemented by the mandrel beam unit, without design compromises to either. The standard 20' (6.1m) load length is also not restricted by the bender's main beam length and does not require an extended frame or other modifications.

Powered centerline radius adjustment of the mandrel unit during set-up is optional on 1000 series benders.

FIG. 4 The "overhead clamp" on top of the radius die opens out of the path of the advancing workpiece. This machine is a booster bender with a second clamp - the booster clamp - on the rear of the pressure die. Booster bending permits right radius bends with a minimum of wall thinning.

PRESSURE DIE SYSTEM The pressure die mounts on a massive master-bar carrier riding on oversized ways which are attached directly to the main beam - not to a cantilevered arm.

The pressure die carrier slide and the masterbar are long enough to permit making 3xD 90º bends at the machine's rated capacity.(Greater lengths are available).

Booster bending (optional) involves a continuous push-force applied directly to the workpiece through a booster clamp. To achieve maximum booster effect, the booster cylinder and its mounting system must be able to exert a sufficient load to bring the workpiece close to compressive yield. With the Jesse Co. boost system, the booster clamp is mounted directly on the rear of the pressure die, which then provides continuous column strength reinforcement of the workpiece under high booster loads (Fig. 4). A sequence of four pre-selected boost pressures are automatically applied as designated degree-of-bend points are reached.

All functions are controlled by handlever valves, combined with digital position displays for all three axes.

(Fig. 4) The bend axis has a digital degree-of-bend controller, with up to 16 (depending on model) programmable pre-sets, controlling both a slow down valve and a stop valve for maximum bend accuracy. The operator simply pulls the "BEND" lever until the spindle automatically stops at the desired degree-of-bend.

Hand lever controls are safer than push button solenoid valves because the operator's hand must always be on the control lever. The operator is safely at the control station during the bend cycle - and the machine stops the moment the lever is released.

Hand Levers allow greater operator control. They can be "cracked" open for low speed or small incremental moves - unlike push button solenoid valves, which are either "ON" or "OFF".

Control lever operation of a 1000 bender is ergonomically designed. The direction of lever movement coincides with the resultant machine movement and/or is simply logical. The levers are sequenced, in functional order, from the operator's left to right.

The bend cycle controls are:

(Only used for set-up. During bending the masterbar, which carries the pressure die, advances with the tube. When the bend die is returned, the masterbar automatically returns first.) Because the masterbar control lever is not normally used by the operator, this is called a "four-Lever" Control System.

Electronic and hydraulic control components on the machine either are located away from points where they might be struck by workpieces during loading and unloading, or are provided with protective guarding.

The accuracy of the workpiece produced by a bender can be no better than the machine.