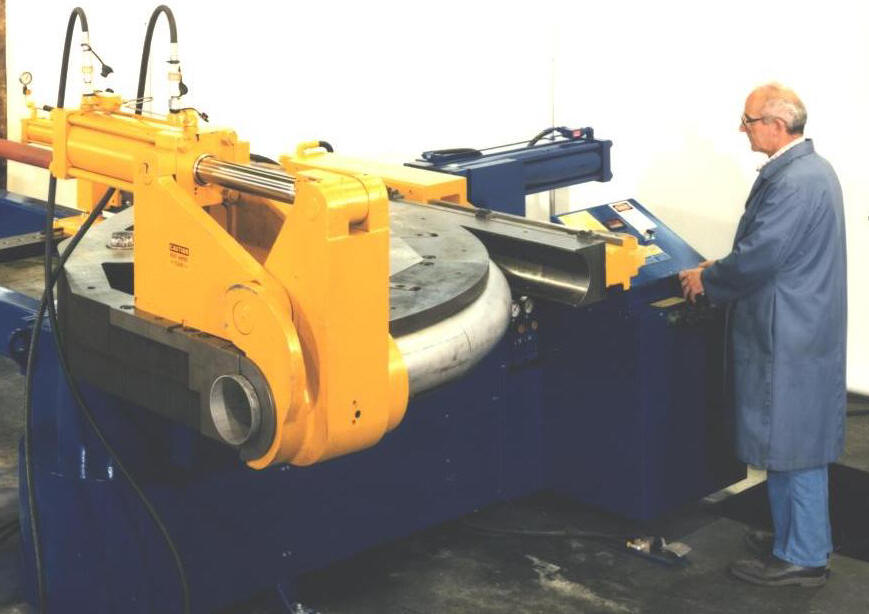 THE LOGICAL ALTERNATIVE TO THE SWING ARM, THE OVERHEAD CLAMP MOUNTED ON THE BEND DIE:

Over forty years ago we realized it was time to rethink the basic swing arm concept as it applies to CNC and large diameter bending. (Wallace Coast was the first to introduce the now standard swing-arm concept in a design for small tube benders before World War II, so we fully understand its strengths and weaknesses.) The result of our research and development eventually became the Jesse Co. 1000 Series Bender with its bend die mounted "overhead clamp".

On traditional swing arm benders the clamp die is mounted on a carrier which, in turn, rests on a slide built into the top of a "swing-arm". (The arm assembly "swings" with the bend die's rotation.) In a swing arm bender, the clamp die, upon closure inherently induces a massive offset load onto the bend die. This can produce a tilt of the bend die. As the bend die rotates, this tilt will result in a continuously varying out-of-plane- relationship between the bend die and both the pressure die and wiper die. the older and the more worn the machine and/or its tooling, the worse the condition becomes.

When the bend die tilts under clamp loads, the upper portions of the clamp surface can actually pull away from the workpiece, resulting in a reduced clamping grip.

Because of the extremely high clamping and bending forces required in bending large and/or "critical" workpieces, this tilting phenomenon has long necessitated the use of such devices as overhead tie bars, center-posts, multiple hold-down bolt patterns, and flange mounted bend dies on swing arm benders.

The toggle type clamp closure mechanism used on most swing arm benders necessarily generates an indeterminate excessive clamping force at its dead-center position before it reaches its over-dead-center locked-up position.

Because it is only an hydraulically actuated mechanical device, it is not possible to use hydraulic pressure gauges to measure the true clamping forces imposed by this device.

There is always the danger of the operator becoming caught between a swing arm and pressure die arm. In the case of a large swing arm machine, the arm is so high, and its pinch point danger envelope becomes so large, that a returning swing arm can engulf an entire person.

OTHER DISADVANTAGES OF SWING ARMS

As bending machines become larger, the swing arm assembly becomes disproportionately more massive in order to impose the necessary clamping forces and to accommodate up to 5 X D bend dies.

The main beam of a swing arm bender is at right angles to the pressure die slide. Therefore, these benders use the immovable main frame for functions which are related to the variable centerline location of the workpiece - functions such as 3-axis carriage ways support and mandrel extractor mounting. Thus, the heavy loads imposed by larger workpieces are carried through unnecessarily complex and/or indirect mechanisms.

Swing Arm Workpiece Interference With all swing arm benders, the arm and clamp become interference obstacles when the pipe is being advanced between bends.

On a swing arm bender this difficulty can only be resolved by either a drop-away clamp mechanism or a separately pivoted coaxial swing arm and main shaft - both of which are more complex, and weaker, compromise "fixes" of an outmoded design. 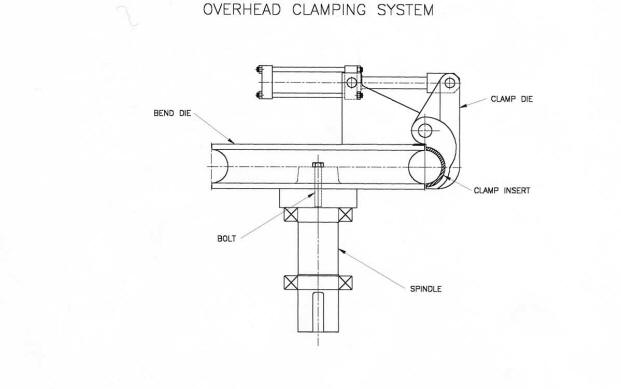 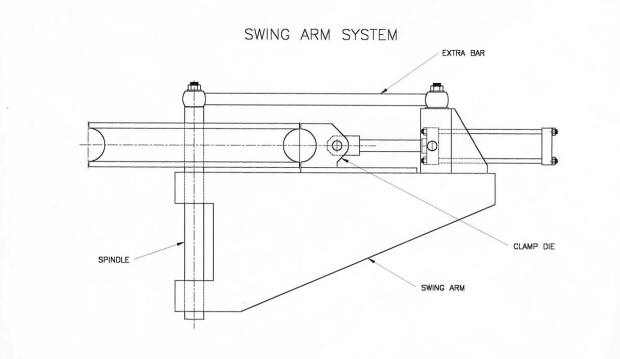 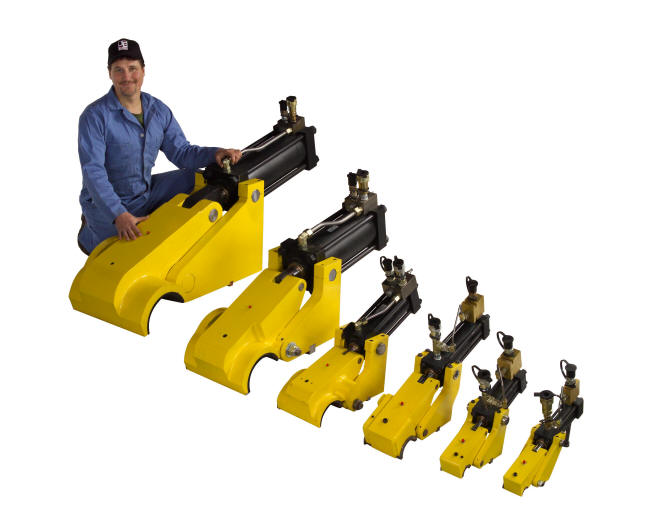